WebMD reported this month about an FDA warning about teething medication, saying that the main ingredient, benzocaine, is linked to a rare but serious disease.  Benzocaine is the main ingredient in over-the-counter liquids and gels used to reduce teething pain in babies and young children.

The warning is about a rare but possibly life-threatening condition called methemoglobinemia, which greatly reduces the amount of oxygen carried through the bloodstream.  Most cases occur in children aged 2 or younger who were treated with teething gel.

The products are used to treat pain caused by teething, canker sores, mouth and gum irritation.  Brand-name liquids and gels that contain Benzocaine include: 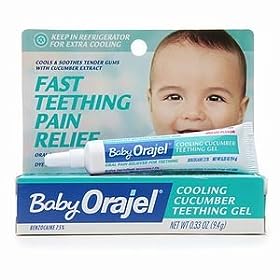 These symptoms appear within minutes to hours of using the medication. Children under two years old should NOT be given products containing benzocaine, unless they are under the supervision of a health care professional.  Adults should follow recommendations on the product label, and seek immediate medical attention if symptoms show up. Use sparingly. Store out of reach of children.

Instead of using teething gels, here are some ideas to give your child some relief, especially if the pain is keeping him/her up at night.

You might be surprised to learn that you are not required by law to vaccinate  your children, even when you want to enroll them in a school or daycare.  All states offer either a philosophical, medical, and/or religious exemption from vaccinations. It is important for parents to know this, since many believe that the law is children must receive “x” amount of vaccines. However, you do have the right to design a vaccine program that is right for you and your child.

The National Vaccine Information Center has the info on each state and what type of exemptions are available. Click here to find out the requirements and exemptions in your state. For example, in California, a parent can “submit a letter or affidavit stating that the immunization is contrary to his or her beliefs.” You can also submit testimony from a clergyman that vaccinating is against your religious beliefs, or a doctor’s letter explaining why you do not vaccinate for medical reasons.

Whether you choose to vaccinate your child is a personal decision. While my first two children were vaccinated according to the recommended schedule, baby number three (who is now 7 months old) is going to be different. The more I read, learn, and discuss, the more compelled I am to take a stand against routine, unquestioned vaccinations, some of who’s benefits may not outweigh the risks.

What do you want for your child? The only way to find out is to research and talk to others about it. Some parents want their child to be vaccinated, but only one or two at a time. This would call for an alternative vaccination schedule. Some advocate waiting until a child is 2 years old before starting a vaccination program. Others make a decision that certain vaccines are a worthwhile investment while others have risks that outweigh the benefits. And some will not vaccinate at all.

Learn the facts. Research both sides of the equation. The bottom line is, you are the only one who can take full responsibility for your child’s health. Neither the government nor your child’s school nor even your doctor can force you to do something you feel goes against your child’s best interest.

You’ve probably heard the arguments in favor of vaccinations. For more info on potential issues:

Generation Rescue: Do I vaccinate?

Rotavirus: The Vaccine Nobody Wants

Just thought I’d alert you to a new stroller recall!  This one actually sounds frightening, according to the U.S. Consumer Product Safety Commission report: “Graco has received seven reports of children placing their fingers in the stroller’s canopy hinge mechanism while the canopy was being opened or closed, resulting in five fingertip amputations and two fingertip lacerations.”  That is not something you want to play around with, so make sure your stroller is not putting your baby in danger!!

Below is the official report, along with model numbers to beware of.

Graco Recalls Strollers Due to Fingertip Amputation and Laceration Hazards

Hazard: The hinges on the stroller’s canopy pose a fingertip amputation and laceration hazard to the child when the consumer is opening or closing the canopy.

Incidents/Injuries: Graco has received seven reports of children placing their fingers in the stroller’s canopy hinge mechanism while the canopy was being opened or closed, resulting in five fingertip amputations and two fingertip lacerations.

Graco manufactured two different styles of hinge mechanisms for these stroller models. Only strollers or travel systems with a plastic, jointed hinge mechanism that has indented canopy positioning notches are included in this recall. The recalled strollers were manufactured between October 2004 and February 2008. The model number and manufacture date are located on the lower inside portion of the rear frame, just above the rear wheels.

Sold at: AAFES, Burlington Coat Factory, Babies “R” Us, Toys “R” Us, Kmart, Fred Meyer, Meijers, Navy Exchange, Sears, Target, Walmart and other retailers nationwide from October 2004 and December 2009 for between $80 and $90 for the strollers and between $150 and $200 for the travel systems.

Consumer Contact: For additional information, contact Graco at (800) 345-4109 between 8 a.m. and 5 p.m. ET Monday through Friday, or visit the firm’s Web site at www.gracobaby.com

To see this recall on CPSC’s web site, including pictures of the recalled products, please go to:
http://www.cpsc.gov/cpscpub/prerel/prhtml10/10115.html