Whether you have gone through a miscarriage or are experiencing pregnancy again after the loss of a baby (high risk or normal pregnancy), the right kind of book at the right time can be a real source of comfort. For someone facing adversity in their quest to build a family, Deborah L. Davis, Ph.D. and Mara Tesler Stein, Psy.D (pregnancy.org) have a few suggested reads.

Every woman should know that fears are normal, especially if you have experienced one or more miscarriages. Here are some of their suggestions to assist in identifying your feelings and helping you cope with them.(NOTE: I did not read these books! The following reviews are copied from pregnancy.org.)

Embracing Uncertainty: Breakthrough Methods for Achieving Peace of Mind When Facing the Unknown, by Susan Jeffers (St. Martin’s Press, 2003.) It is a comforting book that explains how to let go of the outcome and trust the process when you are facing change or entering uncharted territory; accepting your destiny, finding treasures in adversity, following your intuition, finding meaning and purpose in whatever journey you take.

Empty Cradle, Broken Heart, by Deborah L. Davis (Fulcrum, 1996), has several chapters specifically on the emotional aspects of pregnancy after experiencing the death of a baby, as well as lots of support and information around grieving, which can add to your coping ability.

Trying Again, by Ann Douglas (Taylor, 2000) looks at subsequent pregnancy from timing it through delivery, with some on the emotional aspects, as well as lots of medical information that you might find helpful as you progress through the different trimesters and decisions about prenatal care. This book is written especially for bereaved mothers who need a pregnancy book that takes care of their special needs for reassurance and understanding.

Most pregnant woman and new mothers are familiar with the face of “What to Expect when You’re Expecting.” She sits calmly in her rocking chair, wearing a dowdy pink dress. Her shoes and hairstyle are plain and unassuming. She’s big. She’s tired. Ah yes, there she is, as we are used to knowing her: 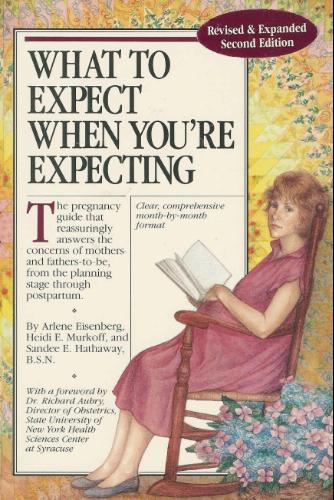 But she looks different in the just-released fourth edition of “What to Expect When You’re Expecting.” Now she’s cool, with long hair and a sleeker silhouette. She definitely looks like she’s got more energy these days. Then again, she also doesn’t look like she’s over-due either:

Pantagraph.com reports: “Pregnant woman erectus — she’s finally off that rocking chair,” quips Heidi Murkoff, author of the hugely successful series she began with her late mother and sister a quarter-century ago. “It was definitely time for a positive spin.”

According to the author, this new edition, largely rewritten, is a chance to present a version that’s “more reassuring, more positive, more empathetic than ever.” That’s good news for women who found the older version to be alarming, packed with a little too much information. Some have called it “What to Freak Out About When You’re Expecting.”

Despite such criticism, the book remains a classic. “It’s a responsible book with good information,” says Dr. Robert Resnik, a perinatologist at the University of California, San Diego, “It is what it is. If it scares you, maybe you shouldn’t be reading it!”

But for the fans of “What to Expect,” there’s not just the new and improved book edition. Now there’s WhatToExpect.com, Murkoff’s 3-year-old site, which the publishers say is the second-biggest parenting site after BabyCenter. The Internet is particularly suited for women going through pregnancy: “It’s the most female invention to come along. You put the word out. Someone responds. You say, thanks, you saved my life. Men don’t communicate like that!”