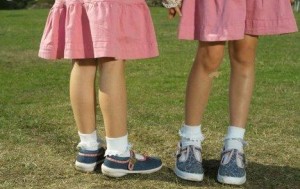 When my kids spend too much time in the house, they start bickering, making a mess, and getting on my nerves. Just taking them out for a change of scenery, to play in the backyard of nearby park, is a simple solution that instantly improves everyone’s mood. I sit on the side and enjoy the fresh air, while the kids run around, play with the neighborhood children, and get some exercise. But I came across an article in The Epoch Times informing me that spending time outdoors has yet another benefit for your kids.

In a study, Australian researchers found evidence that children who spent the most time outdoors were the least likely to suffer from myopia, also called nearsightedness or shortsightedness, which has become increasingly common in recent decades. 12-year old children who spent less than 1.6 hours outdoors every day and more than 3.1 hours in near-work activity (reading, doing homework, drawing, etc) had double to triple the likelihood of being nearsighted, compared to kids who spent the most time outside and the least time in close-up work.

“Our evidence suggests that the key factor is being outdoors, and that it does not matter if that time is spent in having a picnic or in playing sport,” Dr. Kathryn A. Rose told Reuters Health. “Both will protect a child’s eyes from growing excessively, which is the major cause of myopia.”

Researchers don’t know yet exactly why being outside is protective, But it is likely that the high levels of sunlight releases retinal dopamine, which is known to be able to block eye growth. Myopia is caused when the eyeball grows too long.

The more time they spend outdoors, the less likely they are to develop myopia, even if your kids spend long hours in school or at home doing close-up work.  So now you have yet one more reason to shoo the kids outside to play!