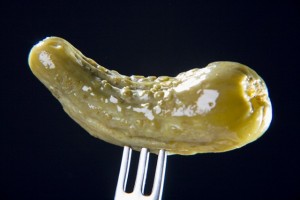 Pregnancy is a happy time, right? So why aren’t you smiling? Between raiding the refrigerator and scampering to the bathroom (again), try reading the following pearls of wisdom gleaned by Sam Leith, whose fiancée’s pregnancy has taught him a thing or two. Such as, did YOU know that ginger biscuits are not a cure for morning sickness? So maybe there are other things you should be knowing about pregnancy (especially if you are the father-to-be)… and you might find yourself chuckling and nodding along.

(from The Times Online)

As I was saying, ginger is not the universal panacea

Is it the internet’s fault? Or is it hardwired into the human genome? For some reason, the one thing everyone knows about pregnancy is that the cure for morning sickness is ginger biscuits. And ginger tea. And crystallised stem ginger. And ginger-flavoured boiled sweets. And ginger pills from health-food shops. And it turns out to be rubbish. I filled an entire room of my house with ginger and ginger-related products. They are still there.

But ginger biscuits do have their uses

Everyone who has already had a baby knows everything

And, boy, do they want to tell you about it. Have a water birth. Have a home birth. Have an epidural. Don’t have an epidural. Make sure you have it in hospital. The pain is FANTASTIC: it hurts so good. Only wimps take drugs. Or, from men: Don’t, whatever you do, look down the business end.

You will never look at your sieve the same way again

Squeamish people, look away now. It’s to do with water births. While you’re weighing up all the options, one of your friends, who is a couple of months farther along and planning to have a water birth will pipe up proudly: “I’ve been entrusted with a special job. I get to use the sieve to fish the poo out of the birthing pool!”

This horrible condition, a secondary symptom of infection by foetus, can easily cross the barrier from pregnant person to pregnant-by-proxy. Apparently, sharing a bed with someone who crawls in stinking of whisky and mumbling about dwarves, before snoring in a series of unstoppable crescendos, is not nice if you’re sober.

This one can take you by surprise. Be prepared. A greatcoat pocket full to the brim with ginger biscuits is what I’d advise.

But they don’t, disappointingly, want to eat jam roly-poly with kippers

You are trying for a child, clearly, because you want a little version of yourself to boss about and teach to do tricks. But you are also sneakingly looking forward to a good laugh as your beloved turns into the amazing coal-eating monster. Watching her stuff the old pie-hole with white carbs leaves you feeling, well, short-changed.

Being pregnant by proxy hurts

As in, “OW! What did you do that for? All I said was that perhaps you’d feel a bit better if you had a wee nibble on one of these here ginger biscuits. Jeez. Get a sense of humour.” Then it hurts again. Then you sleep on the sofa.

Which is a shame, because she’s looking spectacular

Glowing, in fact. A gentle bulge in the tum. Hair shiny. Bosom inflated. Skin all lovely. Did I mention the bosom? It’s also extremely sore. And itchy. And hurts like the very devil in the cold. Jocular offers to rub some soothing liniment in are greeted with a loving, but hard, stare.

You lose the ability to do maths

This afflicts you immediately you start trying for a child. It takes six months, on average, to conceive. You’ve been trying for two whole weeks and the pee-stick has still not turned blue. You become pregnant, and read that your child has a one in one hundred thousand chance of coming out with a foot instead of a nose. You lie awake at night, rigid with fear and self-pity.

You discover there is raw egg, soft cheese or depleted uranium in anything that is tasty to eat

These foodstuffs suddenly take over the world. Everything you are offered makes you exclaim: “Nooo, ambassador! With this canapé, you are killing my unborn son and heir.” You Google taramasalata obsessively, and have intense whispered conferences about poached eggs.

Look! Special anti-stretch mark cream for your pregnant tum. Only – ye gods! is that forty quid? But look… these vitamins have a picture of a BAY-BEH on them …

You profoundly disagree on names

You have, let us say, a penchant for sonorous biblical names, evocative of Old Testament levels of suffering: Ruth, Rachel, Rebecca; Solomon, Jonah, Job. Be assured, your honey will have set her heart on the sort of Eighties pop-star names that would score big in Scrabble: Zack, Xavier or Quelvin.

Instead of something sensible, like tennis ball, rugby ball, etc, babies are measured in increments of lentil, haricot bean, walnut and avocado. Why? It’s not like you’re going to eat it when it comes out.

All your friends seem to start pumping out babies at the same time. The effect of this is that in the your-group-of-friends microeconomy, there will be at any given time 14 strollers, 84 babygrows and 4,001 bootees in circulation. Take them, use them, pass them on.

People find you much less interesting than you find yourself

In the three months before your first scan – ie, before it’s safe to tell people – you become convinced that everyone has guessed. You’re both drinking fizzy water and alcohol-free beer, not smoking or taking drugs, and you’re going to bed at about half past nine. Three months on it turns out none of them even noticed.

You worry about weird stuff

For example, what’s going to happen to the sexy little stud in your beloved’s bellybutton when her navel turns inside out?

When you’re having a scan, that’s her bladder you’re looking through

Did you know that already? Well, I didn’t. It acts like a little window. That’s why she has to drink plenty of water beforehand. What’s through the bladder window, children? Why: children. How cool is that?

You wondered why people who’d had a scan of their unborn child would thrust this granular grey blur in your face and shriek, “Look! It’s its little leg, or something!” Eh? Then when you’re having a scan, this thing springs on to the screen, waving its ten-fingered hands at you, and it has a nose, and legs, and everything, and tears start in your eyes. So you duly go round thrusting a granular grey blur in people’s faces and shrieking, “Look! It’s its little leg, or something!”

You have never been so profoundly, bone-deep excited about anything in your whole life before

OK. They do tell you that. But until the 12-week scan, you don’t believe them.

Pickle picture from womb within.