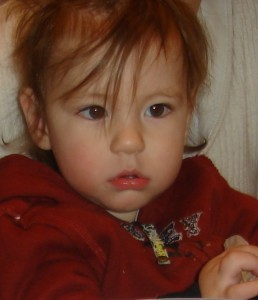 My husband loves babies… any baby will do, it doesn’t even have to be cute. He’ll go right over and coo over the scrawniest monkey-faced little critter, while I admit to preferring the dimpled, cherub-faced ones. And what do you know, it turns out that this is a scientifically proven difference between men and women, not just a random him-versus-me thing!

Baby Chums reports that according to a study by the University of St Andrews, female are much better at identifying a cute baby than men!  Psychologists at the University used computer image manipulation to produce very subtle variations in baby faces. (In case you are wondering about the criteria used for defining a cute baby, it appears to be chubby cheeks, large forehead, big round eyes and button nose. Sounds good to me.)

The researchers believe that cuteness sensitivity may have something to do with female hormones.

Sprengelmeyer said: “Given that cuteness is considered an indicator of being young, helpless, and in need of care, we hypothesise that the ability to detect small variations in the degree of cuteness may have evolved to guide the allocation of necessary maternal resources to the infant.”

Honestly, I think it’s funny that they are measuring cuteness, which I imagine is subjective, even among the most hormonal of women. I mean, doesn’t every mother think their baby is the cutest thing that ever lived? Well, not necessarily, according to Sprengelmeyer, who says “Cuteness is one of the factors that determine how strongly a mother interacts with her infant.”

Back in 1995 there was a report which found that mothers with cuter babies spent more time playing with their children and were more affectionate. [Mothers of] babies which scored lower on the ‘cuteness’ scale were less affectionate with their newborns.

Now I wonder if this is really true. I actually have thought about how I would feel toward my own babies if they weren’t so darn cute. When my son was born, it took me longer to “warm up” to him than with my daughter, and the honest-to-goodness truth is that he was just a frightening-looking newborn. My daughter was the most beautiful baby I’d ever seen, and I fell in love the moment I first saw her. But my son, God bless him, was purple, bloated, and ugly. (Going back to the first study about men and women, it’s interesting to note that my husband thought he was adorable from the start!)

Luckily for me and my son, he quickly outgrew the ugly duckling stage and within a couple weeks he was transformed into the finest looking fellow you’ve ever met (refer to picture!) But seriously, what if he’d stayed ugly? Would I love him quite as much as I do now? Or would I love him madly no matter what he looks like (after all, they say that love is blind…) I’ve seen the oddest-looking babies who’s mothers are completely mad over them! You don’t often hear mothers saying, “It sure is a pity that my little Jason is so ugly. I really find it difficult to love the poor thing.”

And considering the number of funny-looking infants out there, that sure is a good thing for the perpetuation of humanity.